Please tell what happened and how it might have been avoided. Names should be ommitted. This forum should help others learn from mistakes that caused or nearly caused a mishap.
Post Reply
10 posts • Page 1 of 1

Place: In front of the main Kagel ridge's third bowl, at an altitude of around 3000 feet MSL.

Conditions: Clear and relatively calm, with a southwest wind of 8-15 miles per hour. Temperatures were cool (60s?)

What happened: Pilot A (myself) was thermalling in front of the third bowl and nearly got into a head-on collision with Pilot B, who was traveling up the ridge toward launch. Pilot B's hang glider passed about 30-50 feet below Pilot A's hang glider. Pilot A only saw Pilot B's aircraft about one-third of a second beforehand, and had no time to react; Pilot B never saw Pilot A's aircraft at all, and was unaware of the incident until after landing.

Video of the incident (taken from Pilot A's GoPro) can be downloaded/viewed via this URL:

1. Don't assume that because you are alone, you will remain alone. I was concentrating on thermalling efficiently, and while I was looking in the correct direction while turning (i.e. towards my direction of travel) I was focused more on the position of my wingtip relative to the horizon and not sufficiently focused on the regions beyond and above that wingtip; if I had been watching "further away" I might have seen Pilot B's incoming aircraft in enough time to abort my 360 and avoid an incident.

2. When thermalling, watching past the end of the inner wingtip isn't sufficient for safety -- the reason being that the inner wingtip is necessarily pointed down, but if you're in a thermal, you are (hpefully) rising upwards, which means that your glider's path of travel (and therefore the area most important to watch for traffic) is above the wingtip, i.e. at or above your own current altitude. This seems rather obvious in retrospect, but I had gotten into the habit of watching at my wingtip only.

3. When clearing turns, it's important to look over your shoulder to see if anyone is behind you; simply looking 90 degrees left or right isn't sufficient. I'm not sure if that was a factor in this incident (which occurred midway through a 360), but it was pointed out to me in the video that I wasn't turning my head far enough.

Any further suggestions are welcome; the fact that I'm alive today feels like it was a matter of pure luck -- I just happened to be slightly higher than the other aircraft at the time -- and I really want to avoid rolling those particular dice a second time.
Top

I think that Pilot B was in your blind spot until just before the encounter. The blind spot is definitely an issue. If you're banked up in thermal, you will have a blind spot. It looks like you cleared the area that was going to become your blind spot before you banked up and created it. After that, you can try to watch the leading edge and trailing edge of your inside wing to see if anything enters your blind spot, but that's not super easy to do, especially since you need to look around in general. Pilot B was probably a fairly distant little line when he entered your blind spot. The white leading edge helps him be a little more visible. I've often sped up or slowed down a turn to try to see what's in my blind spot. It kind of works, but it's not perfect. I've wondered if having a wing with translucent materials in both the upper and lower surfaces would allow detection of another aircraft in my blind spot. I've asked pilots who fly such a wing and they've indicating that it doesn't really work that way.
Top

Thanks for the report. It happened so freaking fast that I mistook the near approach at 50-sec for the near-collision at 44sec.
I had to slow it down and zoom in, in order for it to even register for me and to better program my mind to avoid such a near-disaster in the future.
There's no need to assign blame or point fingers but to realize just how easy it is to wind up in either situation.
Here's my re-edited and unlisted version for better clarity. 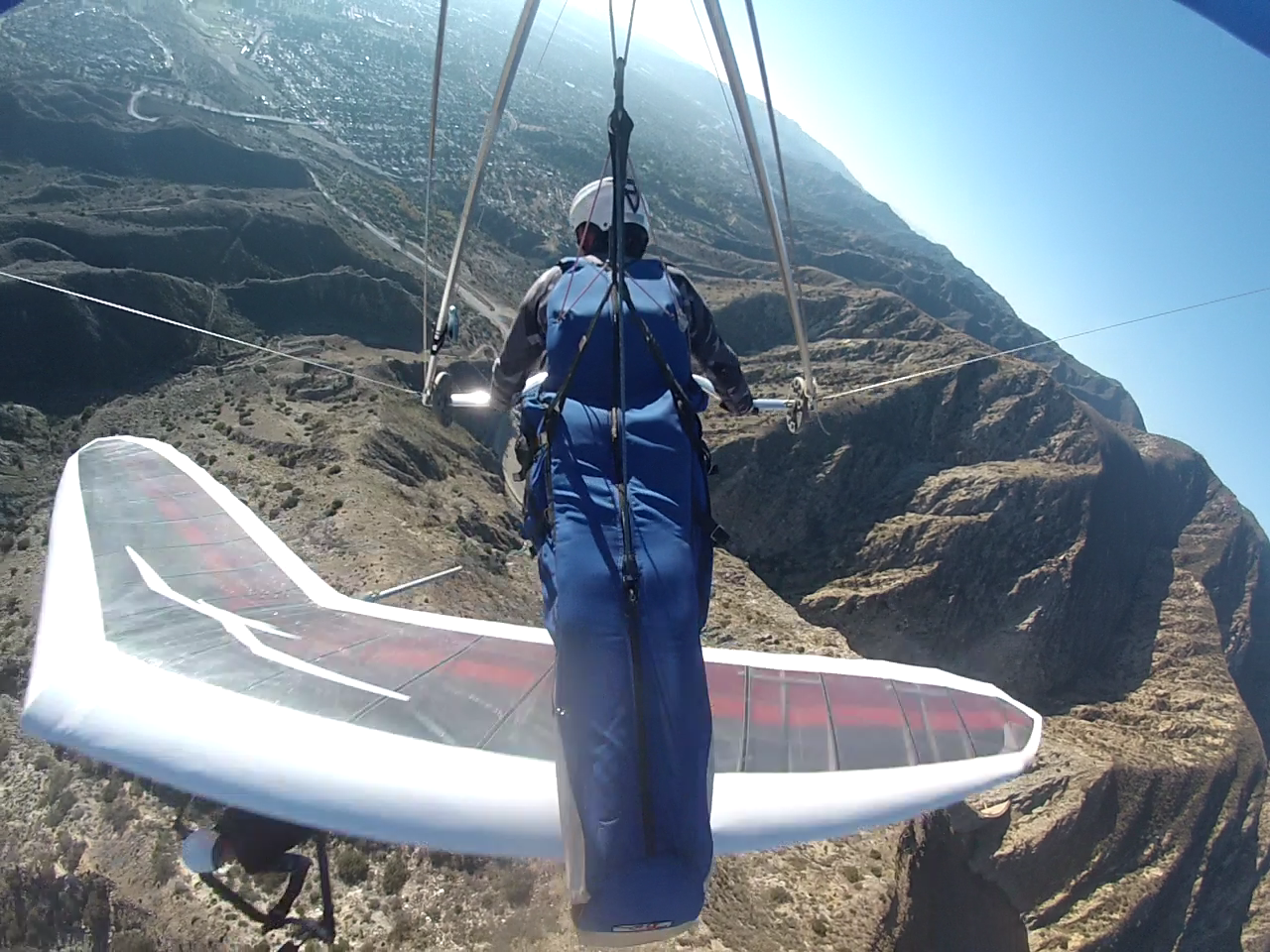 I also look at shadows on the ground when appropriate. This doesn't work all that often, but when it does, it makes a huge difference.
Fly High; Fly Far; Fly Safe -- George
Top

Usually people exaggerate that things are closer than they really are, but judging by that screenshot with that lens and how much of the bottom surface you see on glider B before it passes under A, I’d guess it was a lot closer than 30-50’ ! Glad it it was just close!
I’m a big fan of white or bright colored leading edges, but I see it didn’t even help here.
Didn’t Joe kiss a glider near there a number of years ago? Thanks for the report.
Top

It always takes 2 to tango but I'm amazed that pilot B would be cruising in a straight line up the ridge and never see a glider doing turns in his flight path in a location where people are usually thermalling.
Top

1. Don't assume that because you are alone, you will remain alone. I was concentrating on thermalling efficiently, and while I was looking in the correct direction while turning (i.e. towards my direction of travel) I was focused more on the position of my wingtip relative to the horizon and not sufficiently focused on the regions beyond and above that wingtip; if I had been watching "further away" I might have seen Pilot B's incoming aircraft in enough time to abort my 360 and avoid an incident.

Many years ago, I was flying in the Owens Valley. I hadn't seen another glider for hours and 60+ miles earlier. And that glider was on the ground. Yet, as I set up my landing just north of Luning, Nevada, my driver told me on the radio "Watch out, there's another glider in the landing pattern!" The other glider slid to the left, I slid to the right, and he landed on the other side of the road from me. But we could easily have had a mid-air at only 150 feet or so of altitude, likely too low to deploy chutes.

So, I learned my lesson. You are never alone in the air, no matter what you think. Even if you are, you can't assume that.

BTW, this pilot's crew drove up and broke down his glider in 5-6 minutes. They were gone before I knew it. Wow. Show up out of nowhere, Scare George, Disappear. Who would have guessed!?!
Fly High; Fly Far; Fly Safe -- George
Top

Scary. The rate of speed could have easily knocked out each pilot if not killed them. Resulting in no reserves thrown. I believe this is our greatest danger yet rarely happens. Knock on wood
Top

Wasn't there a the mid-air the preceding week between a P4 & H2 w/ helicopter extraction of the injured P4?

Even when pilots are aware of one another, mismatched wings can result in aerial collisions. https://youtu.be/IAGBLxm_yZI?t=79

This mid-air a Crestline resulted in a tumble, deployment, both wings totaled and broken arm. https://vimeo.com/51328786

Deliberately or negligently flying near another glider resulting in injuries can be prosecuted civilly. A few months ago there was a jury verdict of $7M against the offending pilot. The RRRG may be on the hook for $7M or more unless all parties agree to a reduction. The RRRG may lose its ability to cover us and our sites. Do you have $1M of your own assets or other liability coverage?

If you want your glider to be more visible and help avoid collisions get the fluorescent versions of this self-adhesive holographic film (it only sticks to laminate fabric and not to Dacron). https://paperstreetplastics.com/product ... -inch-wide

Oracal 6510 fluorescent sign vinyl does stick to Dacron and is very bright in any lighting all the way to dusk.
https://www.orafol.com/en/americas/prod ... scent-cast
It's not cheap but it's worth it. You can find it from various online sign material suppliers.
Top

JD wrote: ↑
Sat Jan 08, 2022 12:05 pm
A few months ago there was a jury verdict of $7M against the offending pilot. The RRRG may be on the hook for $7M or more unless all parties agree to a reduction. The RRRG may lose its ability to cover us and our sites. Do you have $1M of your own assets or other liability coverage?

The recreational land use statutes in every state (see Recreational Use Statutes - State by State) were created to protect land owners from liability when they allow people to use their land for non-commercial recreational use (like hang gliding and paragliding). USHPA has failed to encourage the use of these statutes because they would eliminate the need for USHPA's insurance scheme/scam.
Join a National Hang Gliding Organization: US Hawks at ushawks.org
View my rating at: USHGRS
Every human at every point in history has an opportunity to choose courage over cowardice. Look around and you'll find that opportunity in your own time.
Top
Post Reply
10 posts • Page 1 of 1

Return to “Safety and Incidents in flight”