Talk about anything hang gliding.

There is still a pulse.
http://www.northwing.com/pulse-hang-glider.aspx 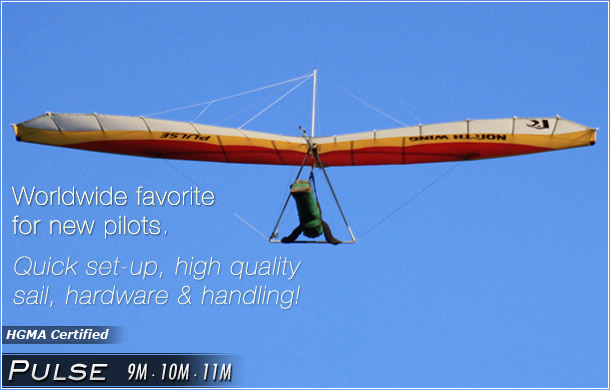 Yes Doug,
keep the pulse,
like you always do

On the other hand, I might need that Pulse...
Top

The Pulse is one of the sweetest gliders I've ever flown.

I'm glad to see it still flying.
Join a National Hang Gliding Organization: US Hawks at ushawks.org
View my rating at: USHGRS
Top

Someone needs to channel the Spirit of Orian.
Top

I don't have a pulse.
I would love to barrow from someone who does

Someone who doesn't have a pulse is destined for a barrow in short order.
Top

Someone who doesn't have a pulse is destined for a barrow in short order.

What,
If someone could lend me a pulse, i would gladly barrow it.

I dedicate this poem to you, my friend Jim.

Eye halve a spelling checker,
It cane with my pea sea,
It plainly marcs four my revue
Miss stakes eye kin knot sea.
Eye halve run this poem threw it,
I am shore your pleased to no
Its letter perfect awl the weigh,
My checker tolled me sew.
Top

Actually our friend is a current SHGA member. But that wouldn't really matter.

Ã¢â‚¬Å“The rights of every man are diminished when the rights of one man are threatened.Ã¢â‚¬Â�
Ã¢â‚¬â€¢ John F. Kennedy
Top

BudRob wrote:Ã¢â‚¬Å“The rights of every man are diminished when the rights of one man are threatened.Ã¢â‚¬Â�
Ã¢â‚¬â€¢ John F. Kennedy

Thanks for your clarity Rob. If there had been a few more calm voices like yours sprinkled throughout history, we might not have had the Salem witch trials or the Nazi holocaust, ... and on a much smaller scale ... I'd still be flying Sylmar.
Join a National Hang Gliding Organization: US Hawks at ushawks.org
View my rating at: USHGRS
Top

barton wrote:it's not dead..... there is just this fear of posting, cuz the man behind the curtain might takeover the discussion to rant about the abuses he allowed himself to be subjected to n summarily expelled from the flock, for life....

the SHGA has only itself to blame.

Barton, don't project your fear of posting on everyone else. Your uncorrected lie is following you like a tail, and you can't outrun it. Your conscience is heavy with a guilt that you can't escape. You could be the light, but you choose to be darkness.

You continually try to justify my expulsion, but you can't wash the blood from your hands. You never will until you have the courage of men like Frank Colver and Bill Cummings who stepped forward to say: "Not in my name."
Join a National Hang Gliding Organization: US Hawks at ushawks.org
View my rating at: USHGRS
Top

Thanks sooooo much, Vrezh!
There are two kinds of people in the world: the quick and the dead.
Top

I don't really get it. How did this start anyway? And Jim, aren't you still flying Sylmar?
Top

And, just for the record, I am not taking sides here. I have known Barton Davidson for many years and have nothing but respect for him. He is a stand-up guy who I am proud to know. We differ a bit here and there as we do on this subject. He is not the only person who feels as he does and I respect his right to voice his opinion.

I still want to know what started this thread because it makes absolutely no sense.
Top

Rob, there are a lot of things (and people) in this sport that make absolutely no sense.

Your quote of JFK was right on target. You didn't take sides with that quote. Instead, you used it to bring both sides into sharp focus. Well done.

As for Barton, I too had a lot of respect for him. It was a nice coincidence that he signed up as Torrey Hawk #100. That was a milestone number for our club, and I've always associated Barton with the celebration of our growth. But Barton has bought into lies and has spread lies. His claim that I violated the northern boundary at Torrey is false. Most people won't bother to dig into it, and they may harbor doubts on both sides. But the one person Barton can't fool ... is me. That gives me an insight into Barton that few others will ever have.

My comparisons to Salem and Nazi Germany may seem over the top, but humans and human nature haven't changed much at all in that time span. People are just as susceptible to mob mentality as they have always been.

It is unfortunately rare to see people standing for principles over popularity. So I appreciate it that much more. Thanks again.
Join a National Hang Gliding Organization: US Hawks at ushawks.org
View my rating at: USHGRS
Top

Well, this is getting funny.
I thought this thread was a response to my e-blast cracks about the forum being dead. Leave it to Barton and BK to find an opening to rant at each other.

Look, I don't care at all about what gets discussed on here, I just like to see a little life so have at it.
Top


Bob Kuczewski wrote:The Pulse is one of the sweetest gliders I've ever flown.


barton wrote:it's not dead..... there is just this fear of posting, cuz the man behind the curtain might takeover the discussion to rant about the abuses he allowed himself to be subjected to n summarily expelled from the flock, for life....

the SHGA has only itself to blame.

I don't know how Barton managed to pack so many false statements into such a short post! Add that to Barton's former uncorrected lies, and the real troll stands out.

You see, I know something about Barton that no one else knows as well. I know for a fact that he lied about Torrey. Anyone else reading the history may be uncertain, but I'm not. Barton knows that, and it must gnaw at his conscience. He would like me to be banned so he wouldn't have to be reminded of his misdeed.

What Barton hasn't found is the simple way out of his predicament. It starts like this:

Those are the words that would set him free, but he just can't utter them. Instead, he continues to be a puppet for forces that he would otherwise oppose. Very sad.
Join a National Hang Gliding Organization: US Hawks at ushawks.org
View my rating at: USHGRS
Top
Post Reply
20 posts • Page 1 of 1